I bought my copy of Jane Austen at Home while on holiday in Devon, when I ran out of reading material (first time in my life that I only packed one book, silly me). I ended up reading it mostly after the holiday, but starting it in picturesque Devon only added to my joy at reading such a lovely book. 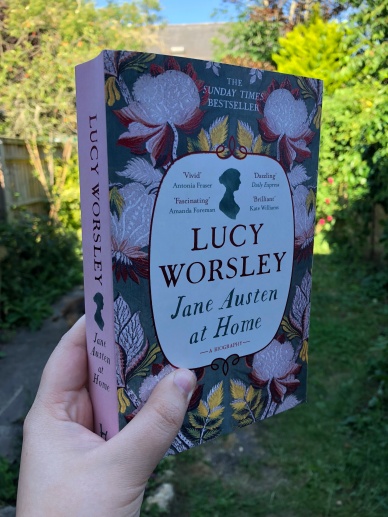 For lovely it is. Lucy Worsley has a wonderfully easy writing style that is great to read, with her personality coming through nicely at certain points, though not overpoweringly. Her academic background means that she covers her subject comprehensively, as well as proclaiming herself a ‘Janeite’ and including all the small details of Jane Austen’s life that make this book so enjoyable.

I have long been a fan of Austen’s novels, but knew relatively little about her life before reading Jane Austen at Home – so it was wonderful to learn more about her. One thing I particularly liked was the way the Worsley related events and circumstances in Jane’s life to similar examples in her novels. This was peppered throughout, always reminding us of Jane’s work and its roots in social realism. We see that Jane was a keen observer of life and preserved so much of it in her work; but also that she put quite a lot of herself and those closest to her into her characters, and this only serves to make them more real and relatable. As a lover of Persuasion, I adored exploring how Jane’s own experiences and feelings informed her creation of Anne Elliot, and her story.

The premise of the book, and the reason for at Home in the title, is that Worsley sets out to tell Jane’s story through the places she lived, “[showing] us how and why she lived as she did, examining the places and spaces that mattered to her.” This is wonderfully executed as we follow Jane through her various homes (there were many), as well as her visits to relatives and holidays to the coast.

Worsley also explores the importance of home to women of the Georgian period more generally, using Jane as a starting point but also using the examples of her friends and relatives. Unmarried women like Jane had no real control over where they lived and were at the mercy of their male relatives, and so they made their homes their own through the small spaces they could claim. Jane shared a bedroom with her sister Cassandra, and in some homes they also had their own little drawing room, which Jane seems to have really cherished. Worsley also explores how women would express themselves through their home-based work, like crafts and music. Writing was of course a key way in which Jane expressed and asserted herself, in her novels but also in poems and letters. I loved Worsley’s examination of how important letter-writing was, not just as a means of communication and connection, but also as a way of really expressing the inner lives of the women who wrote them.

As Jane’s readers will know, she was excellent at what Worsley calls ‘double speak’ – saying one thing, that seemed rather plain, but really meaning something else, or something more, that was much more interesting. In this way Jane used her letters to express her real feelings and opinions that she might not feel able to say outright. Worsley highlights the fact that letters were often read aloud to the household, and one didn’t want something private shared openly, and so this double speak was used to imply hidden meanings. This all adds to the distinct impression that Jane and many of the women she knew were full of deep emotions and strong opinions that were hidden beneath their ‘perfect’ exteriors.

In relating Jane’s life to her novels, this book really shows how life was slowly changing and expanding for women in the Georgian and Regency eras. Worsley presents the time and context of Jane’s books, as well as the novels themselves, as a sort of stepping stone on the way to women’s emancipation and freedom. They depicted life as it really was, and showed readers that women were ready to take more power, to express and assert themselves, and to be heard.

One particular strength in this book is Worsley’s dedication to dismantling the often negative preconceptions about Jane – that her life was ‘without consequence’, that she was an ‘old maid’, that she was boring and lived a boring life. Many of Jane’s relatives glossed over the more interesting parts of her story in their telling, and Worsley uncovers all of these inaccuracies. She demonstrates Jane’s sense of humour, irony, and sarcasm, and explores her love life over the years. Jane received several marriage proposals, and apparently loved to flirt at dances and parties – far from the image we sometimes get of an old spinster with no romantic prospects. Rather, we see that Jane simply did not want to marry someone she didn’t love; she wanted a home, a family, just like anyone else, but she was particular, and not willing to settle for someone who did not really make her happy. This is another reason I hugely admire Jane.

I really could waffle on about how much I love Jane Austen, and how much I loved this book. It is an exploration of her life, but also of women in her time, and their experiences. We learn about their domestic daily lives, their place in both the home and wider society, and the ways in which they took control. Jane Austen at Home really gives us a sense of Jane’s personality and her experience of life, and how this often directly influenced the novels that we love. For me, it is one of the best biographies I have read, and I shall recommend it to everyone. I only wish I could read it again for the first time; instead, I plan to visit Jane’s home at Chawton Cottage this weekend, where she wrote many of her books, and hope that I can follow in her footsteps.

First published in 2017 by Hodder & Stoughton. I read the 2018 Hodder paperback, pictured above.