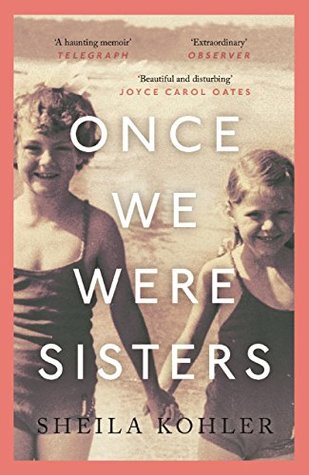 Like the last book I read, I found Once We Were Sisters through my GoodReads recommendations. I had never heard of Sheila Kohler but soon discovered that she is well-established writer of fiction, and this is her first memoir. It centres around her relationship with her older sister Maxine, and the devastation of Maxine’s sudden death at the age of 39. Having an older sister of my own, I knew I would be able to relate to their relationship in some way, and the premise intrigued me. More intriguing still is the fact that Maxine died when her husband veered their car off the road; she died, but he lived. Sheila wonders how this could have happened, and in the prologue poses her questions immediately following her sister’s death:

How could we have failed to protect her from him? What was wrong with our family? Was it our mother? Our father? Was it our nature, the way we were made, our genes, what we had inherited? Or, more terrible still, is there no answer to such a question? Was it just chance, fate, our stars, our destiny? It was not as if we did not see this coming. What held us back from taking action, from hiring a bodyguard for her? Was it the misogyny inherent in the colonial and racist society in the South Africa of the time? Was it the Anglican Church school where she and I prayed  daily that we might forgive even the most egregious sin? Was it the way women were considered in South Africa and in the world at large?

I am still looking for the answers.

This is quite a setup, and I was instantly drawn in.

The book skips about in time, with some chapters covering Sheila and Maxine’s childhood in South Africa, and the rest telling various stories from across their lives. There is very little mention of the years, and only the occasional mention of their ages, and so at times I was a little muddled about which period we were visiting in which chapter; it doesn’t help that both sisters travelled a lot, and lived abroad at various points. Towards the end of the book, when Maxine’s death is discussed in more detail, the timeline becomes more linear and we see how Sheila dealt with her grief and managed to continue on with her life.

There are some wonderful sections musing on the nature of sisterhood, of mothers and fathers, of marriage; both sisters have ultimately troubled marriages, and Sheila wonders why they both chose men that “have almost destroyed who we are.” I particularly enjoyed the memories of their mother with her two sisters, sitting together talking and knitting, weaving stories; likewise Sheila and Maxine playing games and wandering around the grounds of their huge childhood home in South Africa; and their times together in France and Italy, really getting to talk and escape their daily lives.

They are both weighed down by children, and as we learn, Maxine’s husband becomes violent towards both her and their children, and her life becomes increasingly difficult. As the above quote implies, while there is sympathy and comfort for Maxine from Sheila and their family, none of them step in to protect her from her husband, Carl, or offer her anything more than temporary respite. More than once, when Maxine does not want to return home from a trip, Sheila reminds her that she must get back to her children. Leaving Carl is never suggested as an option for Maxine, as it might be today, even when she reveals that he was caught trying to molest a child. Although Maxine has six healthy children, being a mother and wife is the end of her in more ways than one.

Sheila’s troubled marriage is blighted by infidelity rather than violence, and becomes perhaps even more difficult when her husband does not want to end their marriage, despite his affairs, and they continue on together in disharmony. His reasons for this are not explained beyond his declaration of continuing love for Sheila, but one suspects that the weight of tradition and obligation are a factor – likewise for Sheila, as she does not express a desire to leave him at this point. Instead she seethes with rage and betrayal, becoming obsessed with the idea of his lover, and even going to his mother for support. Of course it turns out that his mother is also speaking to him, and playing them off against each other.

A lot of this book is about mothers, and being a woman in a particular time and place, and the expectations society can place on women. Sheila and Maxine, as well as their mother and mothers-in-law, all seem to be trapped by their lives in some way, while the men live more or less as they choose. None of them seem especially happy except when they are purposefully escaping on holiday, or into drinking. Even as children there is a certain gloom over the two sisters – which may or may not be due to Sheila’s knowledge of their fate, woven into the writing.

I enjoyed Once We Were Sisters, but for me the book lacked coherence as a whole. The moves through time seemed a bit random, rather than a carefully constructed timeline, and the sparse writing, though lovely, made the whole thing feel a little out of reach, a little unreal and dreamy. Though I suppose this is how memories sometimes feel, especially if they are wrapped in sadness and grief. The book ends on a vague note, after Sheila has explored her anger and grief, her desire for revenge against her brother-in-law, dissipated over time. She reflects on her sister’s life, and her life as it is now, but does not really draw any conclusions. Instead we are left with the pain of her memories of her sister as a perfect child, and she comes to accept “that she, so lively and lovely, could be dead.”

Published by Penguin and Canongate in 2017. I read the Canongate paperback, pictured above (image via goodreads.com).