‘Tis the season for all things Christmas, but I for one am still thinking about Halloween and all things Gothic… partly because I love Halloween, but also because I recently did two things that have made the Gothic stick in my mind: attending the Terror and Wonder: The Gothic Imagination exhibition at The British Library, and reading the new collection of Horror Stories from Oxford University Press.

First, to the Library. Now that I live in Oxford I don’t get the opportunity to go to exhibitions in London as often as I would like, so I jumped at the chance to visit this one as part of our day out for my boyfriend’s birthday recently (we also had dinner at Gaucho Sloane – very trendy and a bit ‘clubby’, but the best steak we’ve ever eaten). 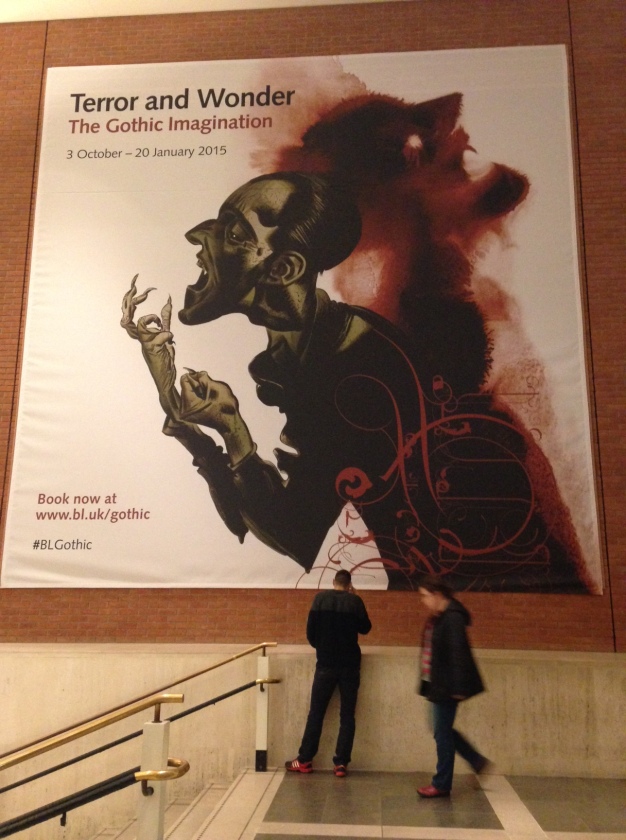 Having studied a few Gothic novels at university, including And Radcliffe’s The Italian, I knew a little of what to expect, but the exhibition provided so much more to think about than just the early Gothic novels. From Mrs Radcliffe it takes you through the Romantic poets (both generations), Frankenstein (there’s quite a lot about the fateful night at the Villa Diadoti where the idea for Frankenstein was conceived), through Edgar Allen Poe and Bram Stoker, and right up to twentieth century Gothic writers like Arthur Machen and H.P. Lovecraft.

There were some beautiful and very cool ‘originals’ like an early copy of Frankenstein, a script for the film Hellraiser, a first edition of Matthew Lewis’ The Monk, and letters between some of the writers I’ve mentioned. Towards the end the exhibition became more and more about film, with a focus on Hammer Horror, as well as later movies like Hellraiser as mentioned, and The Shining (for which there was also an original script with notes by Stanley Kubrick). In short it was a Gothic and horror fan’s dream. We absolutely loved it and I would highly recommend it, even if Gothic and horror aren’t really your thing (and a trip to the BL is always nice isn’t it?). The gift shop for the exhibition was also amazing!

In October, just in time for Halloween, Oxford University Press released a beautiful new collection of Gothic stories, simply titled Horror Stories. It has a fantastic cover, featuring a gargoyle of Thomas Becket, and it is a truly beautiful book: 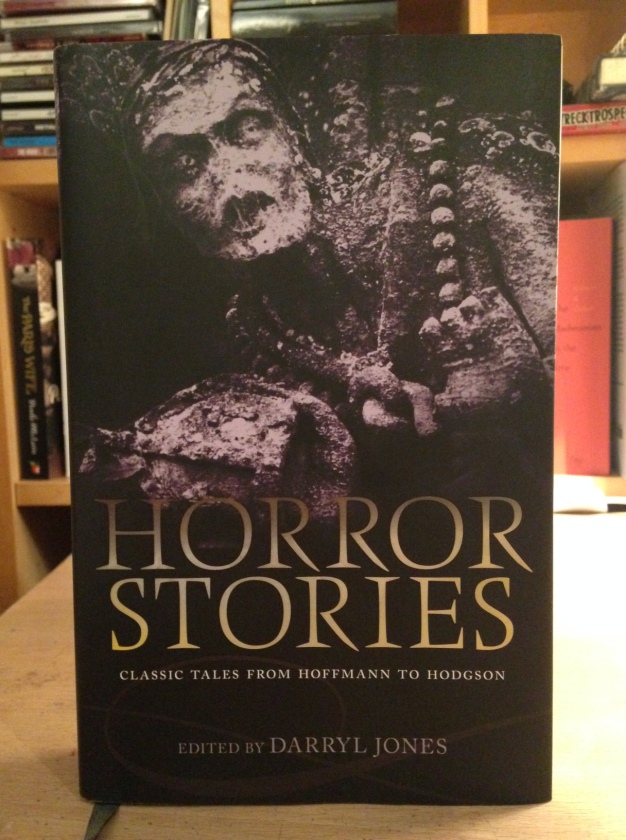 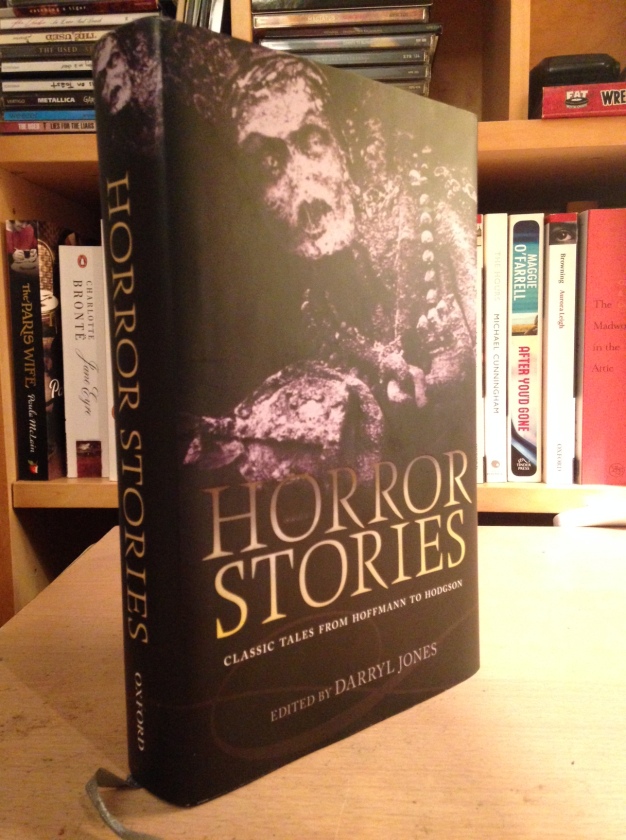 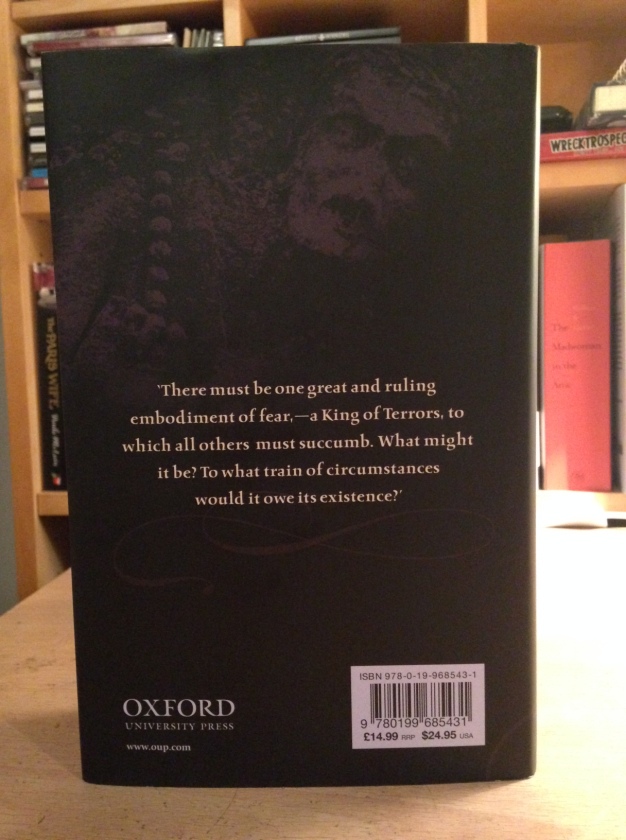 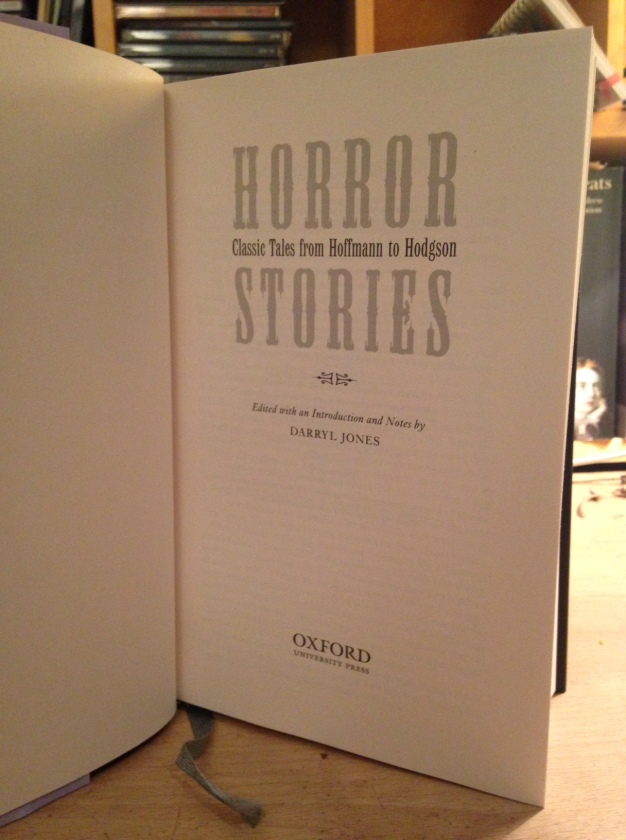 It is a beautifully finished book that you just want to take care of. It has a classic ribbon as a page marker, meaning no folded over pages or crappy old bus tickets as bookmarks. It has also pleasingly thin pages that flop over in a very satisfying way. It is ‘so Oxford’ and a book they should be proud of.

The content is as good as the production. There are stories from some of the best and most famous horror writers, including Bram Stoker, Edgar Allen Poe, Sheridan Le Fanu, Arthur Machen, and Algernon Blackwood. But there are also writers here that I wouldn’t necessarily associate with horror, but who actually fit in rather well, namely Charles Dickens, Arthur Conan Doyle, and Rudyard Kipling. It’s also worth noting that the stories by the more famous writers were none that I had ever heard of or read, so that added some intrigue and excitement.

This volume is also my first opportunity to read The Yellow Wall Paper by Charlotte Perkins Gilman, which is not only psychological and rather chilling, but also a groundbreaking piece of feminist literature. I’ve read it once and am sure I will have to read it again to be able fully grasp the depth of it. The narrator’s tone is so cheery throughout you could mistake it for contentedness, but as you read on, and reread certain sentences, it becomes clear she is anything but content. The ending really gripped me and I read the last couple of paragraphs more than once. There is something quite unnerving about it.

But then, unnerving is something that the Gothic does so well. It creeps us out, amazes us, draws us in, and scandalises us with its horror and glory. I have just finished reading The Raven’s Head (2015) by Karen Maitland, which was dripping with the Gothic, and it certainly did all of those things – as did all the stories in this brilliant new volume from OUP. I really recommend it as a Christmas present (as it’s so beautiful as well as brilliant) for the Gothic fan in your life – even if that’s you! It’s also a perfect example of the power of short stories, and their ability to enrapture you with deceptively simple means. I personally feel that Modernism (such as the stories of Katherine Mansfield) and Gothic are two of the best genres for short stories, and I intend to read more of both in 2015.

I’m sure there are lots of you who love short stories – why do you think they work so well? And will you be reading this new volume of Horror Stories? Or attending Terror and Wonder? It’s so good!

Terror and Wonder: The Gothic Imagination is on at The British Library until 20th January 2015. You can book tickets here.

Horror Stories was published in October 2014 by Oxford University Press. My thanks for the publisher for the review copy.

1 thought on “Fancy A Little Gothic With Your Christmas?”