This is a guest post written by Hannah Gillow Kloster. 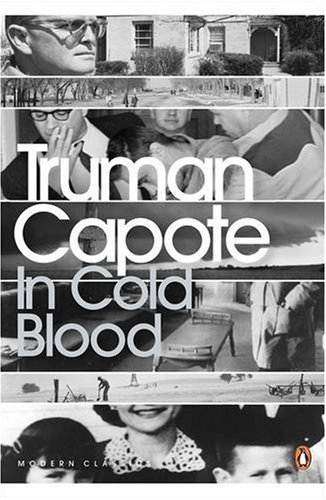 When I picked up (by which I mean downloaded for free and converted to Kindle) my copy (file) of Truman Capote’s In Cold Blood, I knew almost nothing about the book. I knew about Truman Capote, of course. I also saw Phillip Seymour Hoffman in London once. He was so blonde it hurt.

When I started reading, I was immediately drawn into the staging – a small Kansas town, late 1950s, run by Christian morals and cowboy boots. Upstanding members of this proud town wear Stetsons. It is an open-minded community, for its kind, though it is not too proud to gossip. Capote’s immaculate attention to detail, and the fact that he gives a small background story to almost every single character introduced, could make this book incredibly tedious. Instead, it allows the reader to become totally immersed in a world I, at least, was completely unfamiliar with. Not knowing anything about the book permitted me a slight surprise when it very early on transpired that four of these upstanding members of Holcombe, the Clutter family, were murdered. I was also told who the murderers were. At that point, I was beginning to think that this was a very ill-conceived murder mystery. Had I read anything about this book, I would of course have known that Capote read an article about two murderers on death row, and was captured by their story, and set about researching them and the murder case, and wrote a non-fiction novel about it.

About half way through reading, a friend told me that Capote had gone to visit the murderers on death row, and allegedly fallen in love with one of them. I did not have to be told which one, as I had already started thinking that the way in which one of the murderers was portrayed was unusually sympathetic. Though not trying to acquit the murderers of their crime, Capote goes to great lengths to portray these men, their emotions, early lives, how they think of themselves versus how they appear to others. It is this aspect of In Cold Blood that makes it more than just a crime thriller. Capote has created a strangely romantic depiction of a convicted murderer. It is not completely rose tinted, and through giving voice to several other opinions of each of the murderers, the image created of each of them is extraordinarily comprehensive to the point of intimacy. However, in the descriptions of Perry Smith there lingers some hope that there is an explanation behind it all – psychological trauma, mental instability, thwarted hopes. The evocation of Smith carries a hint of what I always found so obvious in Annie Leibovitz’s photos of Susan Sontag – the love the portrayer has for the portrayed.

Now, I am well aware that had I not known any of the back story or the rumours concerning Capote and Smith I might not have seen it. Also, I unquestioningly accepted the theory when told, probably because of my willingness to believe everybody in history was secretly gay. Nonetheless, it is this intimate psychological analysis that creates incredible depth of this book, and is only made more impressive by the fact that it is not a fiction novel, but a detailing of a real-life crime. Capote has given extra-ordinarily convincing dialogues and personalities to non-fictional people, including the ones he wasn’t (allegedly) in love with. In a subtle mix of interviews, reports and descriptions, the three hundred word article that triggered his interest in the case has grown to a three hundred (plus) book, an emotional roller coaster ride of a psychological crime thriller, which grips your attention and transports you into the heart of the American Midwest (and an illicit affair between a tortured, sensitive, cold blooded soul and a fascinated author, seduced by the thrill; in my mind, at least).

In Cold Blood was originally published by Random House in 1966, seven years after the Clutter family were murdered in their Kansas home. It was reprinted by Penguin Modern Classics in 2000.

1 thought on “In Cold Blood by Truman Capote (Guest Post)”

Book recs needed please 😊 #hellboy #mikemignola #darkhorsecomics
Summer reading ☀️📚 #dianaathill #stetaneditorslife #memoir #grantabooks @grantabooks
Had a book audit as we’d run out of space... thought it’d be hard but turns out there were a lot of books I was happy to part with! All either books I haven’t read and know I never will, or ones I’ve read that I didn’t like or just have no attachment to. For whatever reason it does always feel good to have a clear out, even if it is books! 📚📚📚
Tuesday with Tangerine 🍊 #christinemangan #tangerine @littlebrownuk