This gorgeous little book appeared somewhere on Twitter (or Instagram?) recently, and the yellow cover caught my eye. It intrigued me. The cover, the title, the fact that it was a debut novel – all things that interested me. I was in Blackwell’s in the Oxford the other day (the new branch!) buying Mother’s Day presents, and decided to treat myself to the signed edition I saw on one of the tables. 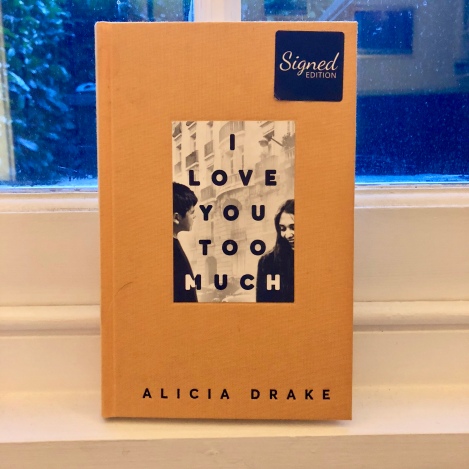 I then did something that rarely happens – I started to read it very soon after I’d bought it. It’s not a long book, only 246 pages, and the type is quite big, and I read it in two evenings and a lunch break. I read it quickly because it’s short, but also because it is completely engaging and enthralling.

I Love You Too Much is narrated by 13-year-old Paul, navigating life after his parents’ unpleasant divorce. The book is set in Paris, and the city is beautifully described by Paul as he wanders around it, both loving and hating it at the same time. He complains about the uniformity, and the peer pressure of the affluent 6th arrondissement where he lives with his mother; but the city is his home and you can feel his affection for it. Drake brings the city to life through Paul.

Drake also perfectly portrays what it is like to be 13 years old, filled with the emotions of puberty, and dealing with post-divorce life in all its glory and pain. Paul reminded me a little of Theo from The Goldfinch – young and naive, and yet wise beyond his years; independent and ruminative; and caught up in the emotions and events of family and life that are beyond his control. They are even the same age.

Paul is a wonderful observer. He watches his mother most keenly, maman, as she obsesses over her looks, her hair, her career, her useless boyfriend Gabriel. The sharp pinpoint at the centre of all this is the fact that she has just had a baby, Lou, with Gabriel. At first Paul is resentful of his new half-sister, uninterested in her. Her presence is an undercurrent in his life throughout the book, reminding him that his mother’s life has continued without him, that she is no longer just his mother anymore.

I think Paul’s mother, Séverine, is one of the most brilliantly drawn characters. Paul adores her, and her pain only seems to make his worse. She is hard on the outside but he can see her vulnerability, and wishes she would spend more time at home and reach out to him. Their relationship is so brilliantly crafted that it feels utterly real, and they feel like real people. I was completely drawn into their world, felt almost like I was seeing too much, but did not want to turn away. For all the cool hardness and aloofness of Séverine, there are some really beautiful moments between mother and son, when you can see into the heart of their relationship. You can see that they really do want each other to be happier, and better.

Paul’s father Philippe is inevitably less present in his life, living separately, but he appears episodically to illustrate their sometimes strained relationship. Paul does not know why his parents divorced, and he doesn’t seem to blame either of them, but the fact that it was his father who moved out, who seems to live a separate life, means that he attracts some of Paul’s resentment towards the whole situation. Philippe often seems oddly unemotional, and you can feel Paul yearning for more from his father. Several scenes with Philippe’s family carefully show us more of his psyche, his emotional life.

Similarly there are key moments with Séverine’s mother that show us more of their relationship. We see how Paul’s mother has come to be as she is. And as the book goes on, these parts of the family come together in Paul, and we see how he was formed, and why he is who he is.

A key part of Paul’s experience in the novel is his burgeoning friendship with Scarlett, the girl at school that all the other boys want. They meet on holiday and recognise each other from school, bonding over their distant parents and general dissatisfaction with life. In some ways Scarlett is an archetype of a moody teenage girl rebelling against everything and constantly looking for ways to feel better, to escape her own pain. She complements Paul well throughout the story, and provides him with the emotional attention he needs – and in her neediness gives him something outside of himself and his family to care about.

I won’t say too much, in order not to give anything away. The plot moves at a mixed pace, flowing nicely so that it never moves too fast or two slow. Enough time passes that things change, but it still feels like the novel represents a certain period in Paul’s life. It is a period of intense change, of growth, for better or worse. The last chapter is a perfect summation, a brilliant, brilliant ending. It is one of about three or four books ever that have made me cry. I highly recommend it.

Published in the UK by Picador and in the US by Little Brown. I read the UK edition, pictured above.