Many years ago I worked as a bookseller for Borders and I have to admit that the true crime section was not one that I thought of as full of ‘literature’. All the books had sensational covers with big red letters and bad photographs. They were small fat books that didn’t get many visitors, and while I thought some of the topics looked sort of interesting, their terrible covers and titles put me off. So I turned my nose up at true crime. It seemed almost as bad as the trend for Misery Memoirs a few years ago –  books that implied you were entertained by the suffering of others and that you fell for the sensationalised titles and covers. They were the book equivalent of the trashiest tabloid newspaper.

But as time has passed I’ve realised that I have an interest not in suffering or sensationalism, but in crime. I like crime novels, detective TV shows, mysteries and thrillers. And surely the best stories are always the ones that are true? These days it seems to me that love true crime is as popular as ever, but there are more socially acceptable ways of receiving it – podcasts are the prime example. People went mad for Serial, and now In the Dark is making a splash, as well as Criminal. There’s also the success of the Netflix series Making a Murderer, which I thought was brilliant. I’m pleased to hear there will be a second series.

I enjoyed Making a Murderer so much because it delved right into not only what may or may not have happened in terms of the murder itself, but also the events following it – the search for Teresa Halbach, the police investigation, and the ways in which Steven Avery was identified as a suspect. The investigative and legal processes are fascinating to me, and I was glued to the scenes featuring Avery’s lawyers as they worked on their case, and especially when they were arguing in court.

Which leads me to serial killers. They are some of the most extreme and troubled of people, and some of the most interesting. There are a handful of topics that regularly lead me down Wiki-holes, and serial killers is one of them. When J. P. March had a bunch of them over for dinner in the Halloween episode of American Horror Story: Hotel, I knew their stories already.

Listening to the podcasts mentioned above, and my Reading Lists project, lead me to consider The Stranger Beside Me by Ann Rule. This was a book I’d been aware of for quite a while, but worrying that it was too trashy stopped me from getting hold of a copy. But my new attitude to reading what I really want made me click ‘order’ on Wordery.com. 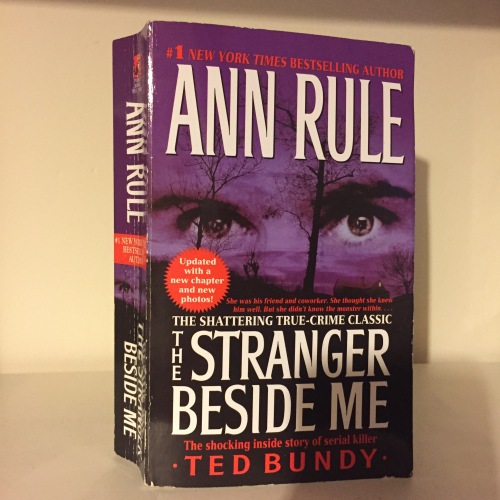 Like the trashiest true crime books, it is small and fat and has a very questionable cover design; but The Stranger Beside Me proved to be an engaging and fascinating book. It is as much about Ann Rule and her experience as it is about her subject, Ted Bundy, and it was a rich and immersive reading experience. Rule was a journalist before she wrote books, and this was her first one, so the style is quite journalistic, which I think worked well. She is methodical in detailing what happened, or what might have happened, and manages to mix the ‘cold hard facts’ of Bundy’s crimes with the emotional aftermath.

Ann Rule was in a unique position when it came to Ted Bundy – she knew him in real life purely by chance, and she was assigned to write about his crimes before anyone knew that he was the one committing them. Some of the most interesting sections in the book are when Rule tries to reconcile the man she knew in the early seventies – young, polite, caring, intelligent – with the man who committed these crimes. He was someone entirely different. In this vein the later updates to the book are fascinating as Rule looks back on the period with hindsight. She states that she was wrong to think Bundy was insane, and that at the time she had a limited understanding of what that meant. The passing of the years has allowed her to learn more about people like him, and for her view of him to expand and develop. She comes to understand that he was not insane, but was a true psychopath.

I wouldn’t recommend reading The Stranger Beside Me if you are home alone and it’s dark outside, particularly if you are female. Bundy kidnapped many women in broad daylight, but the most frightening tales of him are those in which he crept into houses late at night and murdered girls in their beds – such as his ‘visit’ to the Chi Omega sorority house in Florida in 1978. These episodes, along with the kidnapping and killing of twelve-year-old Kimberley Leach, really show the most frightening sides of his personality.

Ann Rule writes a certain type of true crime book. Her heyday was the eighties and nineties, so the covers of her books look quite dated, and they do have slightly melodramatic titles – they do not have the reserved and ‘sophisticated’ look of titles such as The Monster of Florence or Columbine. She does not spare details, and she readily includes the emotional side of the story. The fact is she was not an investigative journalist, and they are the people that usually present true crime stories to us these days. Her style is a little dated, but she is a brilliant storyteller and an engaging writer. I am considering reading one or two of her others books (she wrote a lot of them), and I’m glad to have discovered a new genre of writing that I find interesting. True crime isn’t for everyone, but I will definitely be reading more of it.

The Stranger Beside Me was first published in 1980 by Norton; I read the 2008 edition from Pocket Books (pictured above).

Puchase from Wordery and Foyles.

6 thoughts on “In Praise Of: True Crime”