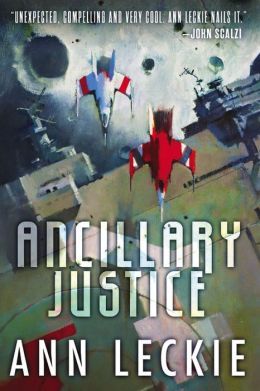 To me, at least, the psychology of reading for pleasure is interesting – why do we do it? What do we get out of it? Why is pleasurable? Why do we like what we like? Different people will have different answers to these questions.

Generally I know what I like, and I can judge relatively easily whether or not I will like a book before I read it. This mean that I look out for – and avoid – certain things. I’ve never thought of myself as a reader committed to a genre, but I know that I like certain types of books, and I dislike others. There are some types of books I know I’ll never read (chick lit, romance, YA, Martin Amis) and some that I’ve never read but I’m not sure why not (I literally can’t think of any examples except Anna Karenina). And there are some that are on my radar, that I like the look of, but that I’m a bit nervous of reading. The main type/genre that fits this description is sci fi.

I like a lot of sci fi TV shows and movies, I know several people who love sci fi and I love hearing about it from them. So why didn’t I read it for myself? Mostly because I get very easily stuck in a niche when it comes to reading. As I say, I know what I like, and this makes it way too easy to read the same type of book all the time. It’s interesting and stimulating, and often still challenging, but it doesn’t push me outside of my comfort zone.

And so we come to Ancillary Justice by Ann Leckie. This book came to me through social media, and I instantly liked the look of it and the premise. The narrator is essentially an AI who was once a ship and a host of ancillaries (human bodies with the AI implanted in them, all part of the same consciousness), but who is now only one human body, and is on a mission to exact revenge (justice, hence the title) on those that destroyed her.

That’s the basic plot, but there are a lot of other factors at play here. Firstly the whole gender thing, which some of you might have read about. The narrator, Breq, is/was part of a people called the Radchaai, who do not differentiate between the genders. As a reader you can see that there are men and women, as we have, but the Radchaai themselves don’t really make this distinction. As an ancillary/ship, Breq is completely unable to identify the gender of other people. Breq uses ‘she’ as the default pronoun in much the same way we use ‘he’ (‘mankind’, for example). The way that Ann Leckie uses this is quite interesting, as it means that we sometimes don’t know the gender of a character until they or someone else mentions it – to Breq they are all ‘she’. I found myself assuming that Breq has a female body at the point when she has only one, and that her ancillaries were female too – but of course there is no way to tell. This ambiguity sets you off on a path of uncertainty and opaqueness that was part of the reason Ancillary Justice was not an easy read for me.

I am not used to reading sci fi, and so I cannot assume that this is a trait of the genre,  but I found Breq’s narration to be simultaneously engaging and cold and distant. She is not human, and does not feel emotions as we do (something highlighted by the emotions of human characters), which I understood, but it meant that her voice was at times a bit flat and monotonous. Sometimes it was a bit this happened, then this, then this. I also found the scenes and scenarios harder to imagine and much harder to connect with – it didn’t feel like a world filled with humans, even though it was. I persevered with this book because despite everything I was fond of Breq, in her many forms, and I wanted to see what happened. I have to admit I did a little skimming in the last third, but then who hasn’t done that, even with a book they liked? Ancillary Justice is very dense, and intense, and so I think that was a factor. Am I glad I read it, that I pushed myself to read something out of my comfort zone?

Yes, I am. I love sci fi in general so much that I have wanted to read something in the genre for a long time, and I’m very happy I did, even if it didn’t totally work out for me. To be honest I’m not sure if I will read the next book in the series, Ancillary Sword, but I do think I will read more sci fi now – I just have to find a book that’s right for me.

I also think that Ancillary Justice would be AMAZING as a movie. I would watch it.

Published by Orbit in October 2013.

Book Riot have also posted about reading outside of your comfort zone. Check it out here.

5 thoughts on “In Praise Of: Reading Outside Your Comfort Zone”