This post is part of the Summer Capote Readathon with The Literary Sisters. Feel free to join in!

I first read this novella in 2008 when I was in the midst of an obsession with Capote and his writing. I tore through his books and declared him to be one of my favourite writers. And now, six years later, I am consciously revisiting his work with the help of my fellow blogger Kirsty. I am so happy that we decided to do a ‘readathon’ of some of his work this summer as otherwise I think I would have just left him on the shelf for much longer than was fair to do so – there are always more unread books. 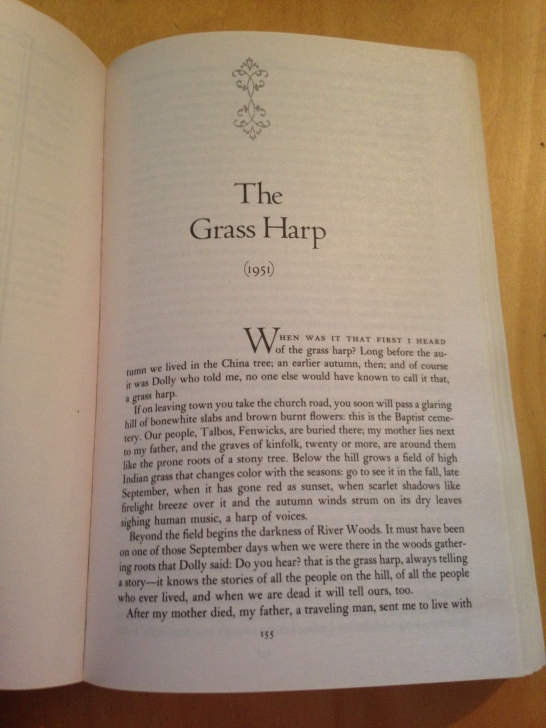 The Grass Harp is a novella, fewer than a hundred pages, and tells the story of one summer in the life of sixteen-year-old Collin. Like Joel in Other Voices, Other Rooms, Collin’s mother has died and he is sent to live with relatives – his aunts Verena and Dolly. His descriptions of his being foisted on them are simply marvellous. While Verena is cold and business-like, coming to collect him from his father’s (a useless man), Dolly is somewhat afraid of this new, young, male, person who comes to live in her house. Collin says he falls in love with Dolly once he sees her, and there is a particularly beautiful paragraph in which he explains that he understands why he was so alarming to her when he first arrived.

Imagine what it must have been for her when I first came to the house, a loud and prying boy of eleven. She skittered at the sound of my footsteps or, if there was no avoiding me, folded like the petals of a shy-lady fern. She was one of those people who can disguise themselves as an object in the room, a shadow in the corner, whose presence is a delicate happening. She wore the quietest shoes, plain virginal dresses with hems that touched her ankles. Though older than her sister, she seemed like someone who, like myself, Verena had adopted. Pulled and guided by the gravity of Verena’s planet, we rotated separately in the outer spaces of the house.

Apologies for that quote being a little long, but it is just so beautiful. ‘…a delicate happening.’ – that is so perfect, isn’t it? This loving description of Dolly is so vivid, so real, and yet also so magical and mythical – like Dolly herself. Despite this shyness and timidity, and what seems like a fear of Collin, by the time he is sixteen she has come to love him as much as he loves her. She and her friend Catherine dote on Collin and act as mothers for him, feeling protective and affectionate towards him. But he is still motherless, and fatherless in a way, and this adds a sense of loneliness and solitude to his character. He barely speaks throughout the story and instead acts as our guide through the events of that summer.

The ‘drama’ begins when Verena brings her new business partner home for dinner, which completely appalls both Dolly and Catherine. Dolly takes to her bed and refuses to see him, despite his being there specifically to see her. He and Verena plan to invest in Dolly’s homemade herbal dropsy cure, which she makes in an old bathtub in the garden – Dolly sees this proposal as a way of taking something away from her, and as Verena trying to control her. Affronted and angry, she marches out of the house, followed by Catherine and Collin. They go to sit in the ‘tree house’ near where they gather the ingredients for Dolly’s potion. It is more or less a platform built into a large tree, but they manage to make it homely with quilts and pillows and plenty of food and drink, and end up spending several days there as they protest Verena’s treatment of them. In such a small town as theirs, news spreads fast and soon the authorities (and the busybodies) are standing around at the bottom of the tree and shouting that they need to come down.

As the situation slowly escalates and various parties get more and more angry, Collin allows the action to happen around him, and thinks to himself about all the relationships, and why these people are acting as they are (himself included). He narrates the story from a future position of hindsight, years after the event, and so perhaps this is why his telling has quite a philosophical edge. It’s clear that Verena and Dolly are no longer around at the time when he is telling the story, and this reminds us of one of the main themes of The Grass Harp – that time continues to pass no matter what, and though we die we live on through our friends and family, and the stories they tell. It’s a beautiful, universal, sentiment that makes this story hugely enjoyable – but the sheer beauty and skill of the writing also make it a delight to read. I adored getting swept away into the Southern heat and the slow pace of life. I was also very happy to be reminded what a wonderful writer Truman Capote is. 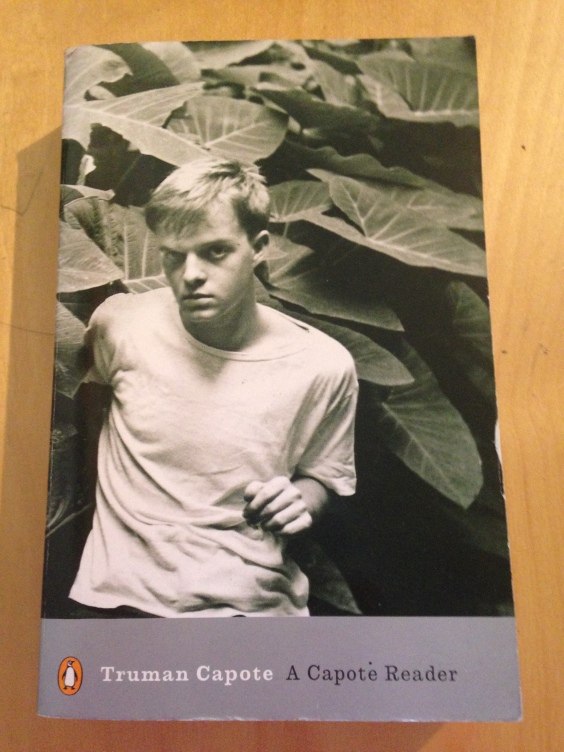 Originally published as a single volume by Random House in 1951. My edition is included in A Capote Reader, published by Penguin Modern Classics in 2002.

You can read Kirsty’s review here.