This review is part of the blog tour for Tanya J. Peterson’s new novel Leave of Absence, published in April this year by Inkwater Press. 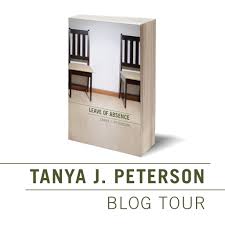 When Leave of Absence was offered to me by Inkwater Press,  it immediately appealed to me because of the subject matter. Author Tanya J. Peterson is a qualified counsellor and chose mental health, her area of expertise, as the basis for her first adult novel. Mental health is a hugely important issue that is often ignored, stigmatised, or not taken seriously, despite affecting most people at some point in their lives.

Central characters Oliver and Penelope are coping with depressive grief and schizophrenia respectively, and they meet when they are both admitted to the same psychiatric health centre. The novel opens with Oliver’s failed suicide attempt, as he falls from a ledge to a landing pad, taking a policeman with him. As he is transported to the centre and introduced to his new home, Peterson’s narrative follows him closely and does its best to open up his internal experience to the reader, while demonstrating the sympathy and efforts of the police and psychiatric staff trying to help him. This works most of the time, and Oliver seems suitably tired of life; the psychiatric staff however often come across as patronising and seem to treat Oliver like a child. Whether this in intentional or not I’m not quite sure.

More than anything the fear of uncertainty is palpable throughout Leave of Absence. Oliver has lost his wife and child, and blames himseelf for their deaths – when the novel opens he has been homeless for several months and is determined to give up. Being taken to the centre forces him to confront his existence and the reader stays close by him as he tackles trying to trust the staff and his fear not only of the other patients and their unpredictable behaviour, but also what will happen to him.

Oliver’s friendship with Penelope changes everything for both of them, and it is wonderful to see their mental health develop and improve. Peterson’s experience as a counsellor no doubt informed her knowledge of how supportive relationships can make a huge difference to people with mental health problems. Medical and psychiatric staff are the ones that make the push in this world, and force the patients to deal with their issues; but they have limited empathy and understanding. Fellow patients help Oliver to understand his own problems.

Throughout the novel Oliver has several flashbacks to his life with his wife and son. There is a careful poignancy to these, but at times they feel a little heavy handed and too obvious. Similarly at times descriptions of emotions, and particularly emotional speech, were a little clunky; but despite this I could see what Peterson was trying to communicate and there was real beauty hidden behind any issues with phrasing.

I particularly liked Peterson’s sympathetic treatment of her troubled characters. She obviously feels for them and takes care to describe how hard it is for Oliver and Penelope to communicate how they feel and what they want. Both of them are lost and trying to work out how to carry out their lives in their new realities; they are forced to work with others and make themselves understood.

Oliver rapidly tossed the ball back and forth from hand to hand. He felt weird, like there was this great pressure inside of him making everything feel like it would explode. He sighed as he searched for words to communicate with Matt. When he tried to put words to what he was experiencing, it sounded ridiculous. But it didn’t feel ridiculous.

For these characters the difference between their inner and outer worlds is far greater than those trying to help them, and this makes it hard for them to relate to each other. But with Peterson’s sympathy and obvious skill as a counsellor, the characters are able to make progress.

While some extra editing could have sharpened certain moments in the writing, this is an accomplished novel and helps draw attention the difficulties and complicated challenges facing both those suffering from mental illness and those treating them.

Published in April 2013 by Inkwater Press. My copy was kindly sent to me by the publisher for review.

2 thoughts on “Leave of Absence by Tanya J. Peterson”

First review of 2020 is up! I loved the #Witcher Netflix series so I decided to read the first book, The Last Wish by Andrzej Sapkowski. Review up now on theselittlewords.com 🐺🏹 @gollancz @orbitbooks #thelastwish #andrzejsapkowski #bookreview #fantasybooks
Book recs needed please 😊 #hellboy #mikemignola #darkhorsecomics
Summer reading ☀️📚 #dianaathill #stetaneditorslife #memoir #grantabooks @grantabooks
Had a book audit as we’d run out of space... thought it’d be hard but turns out there were a lot of books I was happy to part with! All either books I haven’t read and know I never will, or ones I’ve read that I didn’t like or just have no attachment to. For whatever reason it does always feel good to have a clear out, even if it is books! 📚📚📚