This is a guest post by Hannah Gillow Kloster. 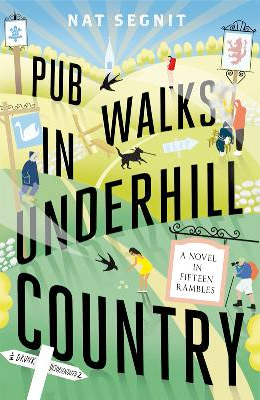 The Penguin Book Bloggers night was, as host Joe Pickering suggested, a whirlwind literary festival: 12 authors, 12 novels, three minutes each. One of the readings that most captured my attention was Nat Segnit reading from his novel Pub Walks in Underhill Country. Hilariously describing a small marital spat in which the wife, Sunita, thinks she is being captured and murdered by her husband Graham, protagonist, rambler, writer, the scene hit straight home. Perhaps it was because I had recently finished reading Dan Rhodes’ oh-so-good, oh-so-funny This Is Life. Perhaps it was the free wine and free books (equally intoxicating, I often find). Whatever the reason, I found myself laughing out loud more than was strictly socially acceptable (luckily Joe Pickering was laughing just as much, which added not only acceptance but in a way elevated me to one of the in-crowd at the event… at least in my intoxicated mind).

Sticking to the PUI (Promise Under the Influence) I made Mr Segnit during the event, I started reading as soon as I got on the tube. And as expected, Pub Walks in Underhill Country was funny. Segnit had described the book as ‘a series of rambling guides hijacked on the very first page by its narrator’ – this, I found, was very apt. The book is a series of guides to pub walks of varying length, in Britain and beyond, written by narrator Graham Underhill, a naive, fleece-loving government official with a tendency to drink. As soon becomes clear, the main thing in his life (apart from the rambles, of course) is his wife Sunita. It also soon becomes clear that she needed more than the usual amount of coaxing to be content to be Mrs Underhill.

Graham Underhill is a very eloquent and self-deprecating narrator (in fact, his narration style reminds me of my networking style, worryingly). He is also very funny. The section on pages 62 – 63 and a half (extracts in the last paragraph of this) is an excellent example of Graham’s unwitting hilariousness, and unselfconsciousness. In fact, he is one of the most unselfconscious narrators I think I have ever come across. At the start of the novel this is an extremely effective comic tool, handled as skillfully as Graham handles his walking stick (complete with gaffa taped voice recorder). The ‘rambling guides’ are hijacked, one by one, by the drama of the small rural town in which Graham and Sunita had made their home, and by the diverse characters and tangled relationships in it, and everything is narrated through a highly biased and insistently naive view point and interspersed with directions for ale-thirsty lovers of good footwear and multi-purpose technical trousers.

There is no doubt that Nat Segnit is a funny writer. There is also no doubt about the originality of this book. However, I do have some objections. Graham’s insistent, patient, well-meaning, slightly exasperating, highly knowledgeable voice becomes slightly grating after a while. And though it is usually quite enjoyable to be able to understand more of the protagonist’s world than he does himself, in the case of Mr Underhill it simply becomes as frustrating to the reader as it must be to his friends and enemies. One simply wants to shake him, or somehow give him a reality check. Which is ironic seeing as he is an entirely fictional character. Maybe I am the one needing a reality check (I am writing this, online, on a plane, in the air between my two home countries. Getting ready for a full existentialist meltdown now).

I did enjoy this book. But perhaps it could have benefited from being shorter, perhaps with fewer episodes, and perhaps more variety as well. There are only so many times the formula directions-Sunita episode-naivety-useless knowledge-pity-finely brewed ale with undertones of [insert any noun]-self congratulation is funny and/or interesting. Though going through some very unexpected plot twists towards the end, Pub Walks in Underhill Country felt slightly heavier than it should have been. Whether the unexpected pathos detracted or added to the overall impression, I think will depend on what each reader expects/wants. But feel certain that this book is funny. Very funny.

Published by Penguin in February 2012, and is available here.