I was kindly invited to take part in the blog tour for the new edition of this book and am very glad I accepted. The new edition was published to tie in with the new 2016 film adaptation.

Despite the Falling Snow takes place in 1990s Boston and 1950s Russia, moving deftly between the two timelines. In both we have Alexander, who worked for the government in Russia, but who moved to the US at the end of the 50s. He escaped communism but was forced to leave his beloved wife Katya behind, and she passed away. She was also a spy for the Americans, and Alexander blames himself for her death.

In 1990s Boston he is a successful businessman, on the brink of selling his business. He meets the mother of his potential buyer, Estelle, and they quickly develop a friendship; he also becomes close to his niece Lauren, the daughter of Katya’s brother Yuri (who was able to escape to the US), and things start to change.

Estelle is fascinated by his life story and is desperate to know more, and Lauren desperately wants to know what really happened to her aunt. Alexander thinks he has buried his feelings and his past, but these two women force him to reexamine this and try to confront the truth.

Suffice to say I really enjoyed Despite the Falling Snow. It is a bit of a slow starter, but gets better and better the further you read on. The pacing is my only real criticism – I wished we could have spent more time with Katya and Alexander in Russia when things start to get really desperate, and the crux of the story takes place. But this in no way ruins the book, and the outcome of the story in both timelines is excellently done, nuanced and sensitive.

I also loved the ways in which the story demonstrates the effects of the past on the present – both for those who were there (like Alexander) and for those to whom it is important (like Lauren). The relationship between Alexander and Lauren is depicted with emotional intelligence and sensitivity. He is ageing and somewhat closed off, and she helps him to soften and open up, and they bond over this process.

I found Estelle very interesting – in some ways she is the archetypal put-upon housewife with a distant husband and daughter; but Sarif gives her real depth and personality, and the difficulties of her life are dealt with very sensitively. I raged silently with her when her husband is being, frankly, a terrible person, and wished that she would find what she was looking for. Her friendship with Alexander is very sweet and you can see how important it is to both of them, in different ways.

While there is great sadness and injustice in this book, they are not overblown, despite being keenly felt. It would have been very easy for Despite the Falling Snow to be almost melodramatic, but Shamim Sarif handles her story and characters with grace and sensitivity, and a deep respect for the past. A wonderful book.

Originally published by Headline in 2003; I read the 2016 edition published by John Blake/Metro (pictured above), which was kindly provided by the publisher for review.

Here are the other dates for the blog tour: 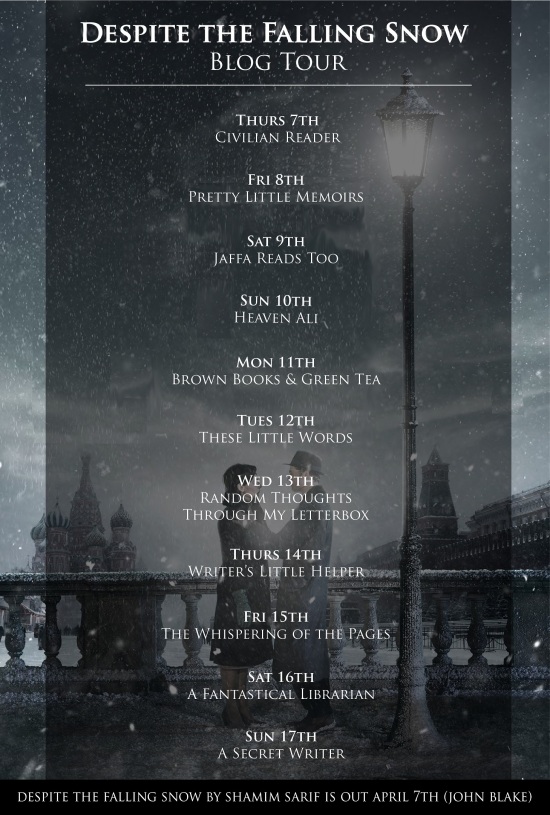 Buy your copy here from Foyles.